The top Independent website for learning about and sharing information on lawns and gardens. Site includes the Internet's best lawn care forum

Last for the night, and I'm sure everybody's getting bored of them (although I also make clay "plants" and "snails" and a host of other stuff). Three more candles, all with clay work, and what one looks like lit.

These are candles in the raw, as they harden with the wick placement devices still in place.

WHAT HE SAID!
Top

Not bored....I love the one that's lit. Love that style. (Blue one from yesterday also) After seeing the Northern Lights many times while living in Iceland I became fascinated with the movement of them. (No I wasn't under any recreational influence)

:) I call it "The flowing smoke curtain". Yeah I know it's corny but it's my interpretation.
Top

Oh, very much so. I love the idea of the Northern Lights. That and moonlight are the inspiration for a ton of my work (you'll notice how often the moon is featured, along with light in the sky even if it isn't directly an aurora). I've even incorporated mica and diffractive pigments into translucent polymer plastics and attached those to glass.

So who's reading this thread and thinking to themselves, "Did I ever really even KNOW Morph?"

Here's a fun little group of roll snails, too. Ask me about my clay succulents.

I knew I had this somewhere; I actually just dug it out to re-display it for November. The discussion about the nebula pour and planet painting made me think of it. It's a sketch from March or April that probably should go to canvas with some modifications--brighten it up a bit, mostly. 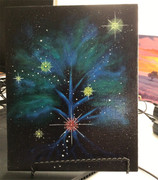 OOHHH YYEEAAHH!...now we be talkin. Nice sketch Morph, Like the smoky veil effect. A "celestial tree" so to speak? Strange I'm in the mood for a escargot appetizer right now. Don't know where that came from.

Did somebody say clay succulents?
Top

It's titled "The Star Tree," so yeah.

The dotted stars in back are also slightly reminiscent of the
Hertzsprung-Russell Diagram, but that's intended to be pretty subtle, and the giant stars themselves aren't placed appropriately on the diagram, but instead where they artistically balance the painting.

Here's a couple plants with a gnome house; I have these on a shelf in my office with a clay dragon, a clay duck, clay turtles, clay snail, and so on all hanging out together. I've added some of the roses below to that just for fun as well.

I do jewelry, but it doesn't seem to go over very well for some reason. I've since stopped bothering for that reason; the inlays are complicated and tend to be rather unappreciated, so there's no sense spending hours for things nobody wears.

Although I did make a dragon's eye for my D&D DM as a joke gift that went over beautifully. Even during Budweiser-19 and virtual sessions, it's always around his neck. He got an LED necklace for his birthday as well that I built out of a piece of resin "ice," black copper wire, and a 3.7v mini lithium battery plus a resistor.

Here's the images of the dragon's eye and the LED necklace I was talking about. Neither look particularly good in images, actually...

I do stuff with LEDs, controlling chips, or just build the stupid flyback oscillators myself.

Geez Morph....what can't you do??? How the h... can anyone have so much talent? Clay snails with the succulents are neat. Wife thinks they are adorable. Jewelry is really nice also. She likes the ones that look like sandstone. She wants to know if this is a real person? My reply, "i am not sure now".

(Pats self) I think I'm real. It's the rest of you I'm not all that sure about sometimes, though.

I made a set of night/accent lights in glass bottles for the bathrooms using USB power (safer and easier) and twisted the controlling circuit into that little black bit by the cork. Which, since most of the power management is in the USB power controller, is very little indeed.

Or I just work directly with 1.2V battery power, use an oscillator/capacitor combo to step it up and a solar panel to recharge the battery and detect light to turn it off during the day. Light, too, can be art.

'Tis the season. These were fun; they're a basic plastic Christmas bauble where I had an 8 year old's level of fun making a massive mess all over the place. Take a plastic-wrap-coated container (so you don't ruin it). Add water. Pour nail polish or other fast-drying acrylic into it. Dip ball and lift. The acrylic likes (is electrostatically attracted) to the bauble far more than the water and adheres. Let dry by hanging--color may drip a bit, so put paper towels under them.

Redip for each new color.

Next up, I also did some clay ornaments on glass baubles. And I'm painting ornaments, too.

This was Design and Pray; the bauble is thin as a whisper and I was afraid it would pop when I fired it. It came through like a trooper, but is seriously heavy and has to be wired onto the tree. I made several of various colors (true red, pale pink, and so on).

you never cease to amaze!!..nice
Top

There was a minor smear upon varnishing. This actually sometimes happened with the oldest wallpapers, so...I didn't fix it (normally, I'd lift the varnish and repair the canvas).

I'm working on 2x2", 2.5x2.5", and 3x3" Art Bits that can be hung on the Christmas Tree, Hanukkah Bush, or just placed around the house where they'll be fun or interesting (hand drill, plug, string). Some of these are a miss, and trust me, I know which ones are. Those are set to be pulled and re-painted. Many use iridescent or reflective paints, the largest seascape doesn't, but even if they do, the effect is usually pretty subtle.

The running joke here is "Bob Ross for Ants."

I redid The Star Tree on canvas. That red giant in the middle needs a tad of a redo; the glint isn't white enough and it needs to stand forward just a bit. But otherwise, it looks good. It's now an 11x14".

I'm no artist but concur with you Morph. Man that looks really nice. Noticed there is more of a "root system " added.
Top

More roots, the "leaves" closer to the base are brighter, there's more outward flow, and more background stars. I enhanced some of the tones and tonal mixes as well, but that's kind of subtle and twists of turquoise can be awful hard to see.
Top

Sorry morph.....that was my impression when first saw the sketch. I guess the old adage "everyone sees something different" may have some truth to it. Regardless, it is fantastic!!
Top
Post Reply
87 posts

Users browsing this forum: No registered users and 1 guest

Maxthon style by Culprit. Updated for phpBB3.2 by Ian Bradley